200 athletes from 11 countries confirm their participation

The eyes of lovers of sports and adventure tourism worldwide are in the country, where the 5th Edition of Xterra Dominican Republic will be held on September 4 and 5, as part of the Xterra PAN AMERICAN TOUR circuit, with the sponsorship of the Ministry of Tourism.

200 participating athletes from more than 11 countries will meet on that day that will take place in Las Terrenas, Samaná, one of the most beautiful tourist destinations in the Dominican Republic.

The event program includes Trail Runs «Carreras en Trillo» in distances of 5k, 10k and 21k, as well as off road Triathlon in the Sprint & XTERRA distances that entails 1500mt of swimming in open water, 15 km of mountain biking and 10k of running race.

In addition to the Ministry of Tourism, the 5th Edition of Xterra República Dominicana, has the support of the Viva Wyndham Resorts, Sublime Samaná and Cosón Bay Hotel & Residence hotels, host of the event.

XTERRA is the world’s leading brand of “All Terrain” Off Road events, holding more than 100 triathlon and pedestrian races in more than 30 countries.

XTERRA in the Dominican Republic, with the celebration and assembly of these events, seeks to be an instrument to promote “the Caribbean country as a world-class tourist, sports and adventure destination.”

On the 5th. This edition has confirmed the participation of numerous international elite athletes such as the Americans Brad Zoller, Elliot Bach, Tom Eickelberg and Humberto Rivera.

From New Zealand we will once again have the participation of Kieran Mcpherson, Paco Serrano from Mexico and Ismael Vega from Ecuador.

In the female category we will have the participation of Valentina Carvallo from Chile, Xterra Chile 2019 champion and Brandi Swicegood from the United States, who started in the sport after giving up her professional career as an investigative news reporter.

XTERRA Dominican Republic has generated a lot of enthusiasm in the sports community both locally and internationally for the challenge of developing these competitions in a place of such beauty and natural challenges with the beaches, rivers and mountains of Las Terrenas in Samaná. 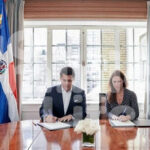