According to data offered by the Directorate General for Cinema (DGCINE), the country was the scene of 49 international film projects in 2021 that helped economic development by increasing hotel occupancy and generating a large number of jobs in the construction, transportation, food and beverage sectors, among others.

For several years the Dominican Republic has been a very attractive destination for filming movies, series, documentaries and video clips thanks to our beautiful beaches where productions have been filmed awarded the most prestigious prizes in the word.

1- The Godfather II
Shot by Francis Ford Coppola in 1974, scenes were recorded in the colonial zone of Santo Domingo, and in particular, the Duarte and Mella avenues, as well as Independencia Park, El Embajador hotel, Agua y Luz Theater, the Nautical Club of Santo Domingo, Pedro Henríquez Ureña National Library, National Palace, Hostos Street and Padre Billini Hospital for the great aesthetic resemblance to the city of Havana, Cuba.

Considered the best sequel in the history of cinema, it was nominated for 11 Oscar Awards, winning 6, including the award for best film, best director, and best supporting actor, in which actors of the stature of Al Pacino, Robert De Niro or Robert Duvall.

2- Rambo II
In 1985, the second installment of the filmography that tells the story of John Rambo also used the landscapes of the Chavón River in La Romana.

Its extensive cane fields were perfect for staging John Rambo’s return to Vietnam where filmed the scene in which Rambo escapes from a helicopter.

3- Pirates of the Caribbean
The famous pirate saga was filmed in different locations in the Caribbean, and among them is the Dominican Republic.

Directed by Gore Verbinski and starring Orlando Bloom and Johnny Depp, it premiered in 2003.

4- Jurassic Park
It’s one of director Steven Spielberg’s great films was inside the Amber Museum where the opening scene was filmed in which the mosquito is shown, one of the symbols of the film, which is still preserved in the museum itself.

The Puerto Plata City Museum not only served as one of the filming scenes, also as a source of inspiration to create and design the film. Steven Spielberg’s work won all 3 Oscars for which it was nominated: best sound editing, best sound and best visual effects.

5- Fast and Furious 3.5, 4 y 7
Directed, produced and starred by Vin Diesel in 2009 who is a Dominican lover and has recognized that the idea for the first film arose during one of his trips through these lands.

The beaches of Monte Cristi, the Colonial City of Santo Domingo, Santa Bárbara and the Malecón de Santo Domingo, are some of the areas where Fast and Furious scenes have been filmed.

This action movie was filmed entirely in the Dominican Republic, in different areas of the country such as Miches and Samaná.

7- Shotgun Wedding
Starring Jennifer López who has been filming since the end of february 2021 in locations such as Cabrera, Playa Grande, Sánchez, Samaná, as well as nearby landscapes of the northeast coast.

It’s an American romantic comedy action film directed by Jason Moore from a screenplay by Mark Hammer and Liz Meriwether.

8- Old
Directed by M. Night Shyamalan who expressed very happy with the film and described the Dominican Republic as the most incredible island. That movie was filmed between september and november 2020, on Samama beaches.

Shyamalan, who has titles such as “The Sixth Sense” and “The Unprotected” in his catalog, said that the setting for this film had to be the same as the one he imagined in his head and found it on this half-island.

9- The Good Shepherd
In 2006, directed by Robert de Niro, with actors like Angelina Jolie, Matt Damon, Alec Baldwin or Robert De Niro himself.

Areas of the Colonial City in Santo Domingo, the Santiago airport and the National Palace were chosen to film some of the scenes of the film simulating scenarios in Cuba.

Beach Front Condo Just in the Center of Cabarete

Dominican Republic Recognized as “The Best Island in the Caribbean for Families and Friends”. 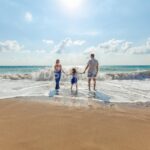 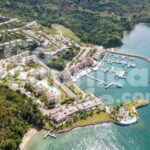 Construction of the Samaná Cruise Ship Port Will Start in July